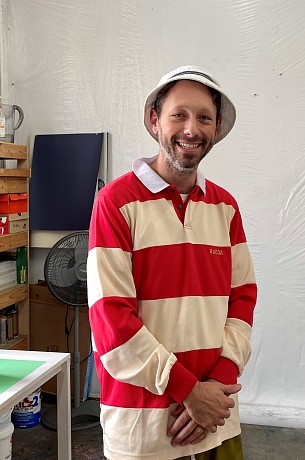 The Alchemist’s pursuit is twofold. While working on a material, they are also working on themselves. I parallel this micro/macro process to my studio practice. As a painting evolves, so too, should I.

Like the Alchemist, my tools are intuition, trial and error, and reflection. Through practice and patience, I look to perfect my art and self.

The subjects of my paintings reference this process of becoming, states of transition, creation, and learning. An amoeba becomes a flower, a flower becomes a cosmos.

I am the Alchemist surrounded by vessels of gestating nature and I am the vessels themselves.

Ryan Fenchel is a Los Angeles based artist with roots in the Midwest. After growing up in Chicago, he moved to Kansas City where he received his BFA in printmaking at the Kansas City Art Institute in 2003 and later received his MFA in Art Theory & Practice at Northwestern University in 2007. At Northwestern, Fenchel made work in a variety of mediums, focusing on occult/ancient cultures and their parallels with modern cultures (e.g. hip hop and Nintendo). As his work evolved, the contemporary cultural elements faded into art historical references coupled with the occult themes. In 2005, Fenchel began taking annual trips to Japan. These trips - and a continued interest in the occult - have formed the aesthetics of Fenchel's visual decision making. Over the years, works have moved from visually dark collage and drawings using ink and charcoal to bold colorful paintings using chalk pastels and oil sticks with a focus on Alchemy and the pursuit of the alchemist.

Fenchel has had solo shows in Los Angeles at The Landing Gallery, in Chicago at Carrie Secrist Gallery, Dan Devening Projects, and Vega Estates, in Seattle at the Department of Safety and in Kansas City at Haw Contemporary. In addition, he has been featured in group exhibitions in New York, Chicago, Los Angeles, Tokyo, Berlin, and Philadelphia.