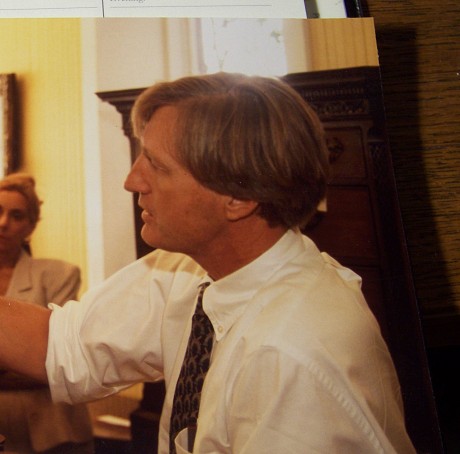 George Read arrived at Harvard as a pre-med freshman. Biology and chemistry were his first love, so it was unusual when, to fulfill a humanities requirement, he encountered famed Dutch old master paintings scholar Seymour Slive, one of the university’s most celebrated lecturers. Three years later, Read graduated with a degree in the History of Art.

The Fogg Museum curriculum was strictly old-school then but it included, for those who chose it, studio work. A sober exploration of the techniques of painting, sculpture, and printmaking was encouraged. Then in residence at the Le Corbusier studios were famed masters Eduardo Chillida, Afro Basaldella, and Robert Neuman. That was a beginning.

Around this time, there was a summer job assisting renowned art critic Harold Rosenberg in the Hamptons. Read describes those days as “something of a blur- a sort of BUDS training in the fine arts. I was technically just his gardener, but Mr. Rosenberg thought I needed serious artistic toughening up, and he took the job very seriously. The easy days were when he'd lend me out to friends, the artists Adolph Gottleib and Willem de Kooning among them. I’d go to their places and do chores."

Later, in France, in the fall of 1977, he had his first show, a two-man exhibition with a young Japanese sculptor, Tetsuo Harada. There, Read’s paintings and assemblages attracted the attention of well-known French art critic Michel Tapie, who invited him to share studio space with a group of emerging artists at the newly-opened Centre Pompidou, in Paris. The plan was interrupted. Before he could move into the new space, he was offered a position at Sotheby’s, New York. He took the job and moved to the United States.

This next evolution, as specialist, auctioneer, lecturer, and consultant engaged him, in some function or other, with “nearly every category of art and antiquity known, the collectors of those objects, and the markets where they trade, both real and fraudulent.” A glimpse at those times: on a steep and unrelenting learning curve, the constant search for properties, appraising and cataloguing, work with Paul Newman, Joanne Woodward, and Barbra Streisand in New York, and Claus von Bulow in Newport. A trip to Los Angeles with Oprah to find furnishings for her place in Chicago. He appeared on her show twice. On the second, he auctioned off a Michael Jordan game jersey to an audience of millions. And always, more cataloguing.

Now he is back in the studio. He describes the break as immensely positive; an opportunity to sharpen and refine-, even if the break was quite a bit longer than anticipated.

His process is just as it was when he left off. Years ago, Eduardo Chillida suggested he work on a piece only until form and definition began to suggest itself. Then, stop, no matter how tempting it was to continue.  A day or two later, surrounded by works in varying stages of progress, he'd start again.  He'd work several pieces at once, moving from one to another without a pattern or plan. In theory, the eyes stay fresher this way, and the mind more open.